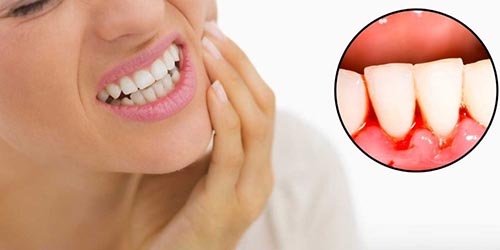 On a fine day, you suddenty notice your gums are bleeding. It does not really matter that you found yourself in such a state during brushing or while doing any other task but is alarming and you should consult a dentist at the earliest. Before you end up being a complex case, it is better to act smart, visit a dentist and rectify the problem at the earliest. Rejové Clinique which is a tooth implant clinic in Green Park Delhi recommends the causes of gum bleeding.It also enlightens you about what can be done to overcome such an issue.

A sigh of relief for the people is there who have found small traces of blood during brushing and can be ignored but if it occurs frequently then it is not a wise decision to ignore it. On thant note, inappropriate instrument like wrong type of toothbrush should be avoided i.e. hard toothbrush is to be avoided to the highest possible extent. Moreover, correct brushing technique is also necessary else your gums will create trouble for you. If you are still not aware about right type of toothbrush for you then you can consult a dentist for a right instrument as well as technique. Normally, a soft-bristled toothbrush can be used if you want healthy teeth and gums. In addition to it, fluoride rich toothpaste can be used which helps in making tooth and gums happy.

A proper care must be given to the gums when you floss. A change in routine or over stuffing of flossing is not good which means if you do not floss for several days and suddenly you realize that flossing is must and due to this, you start flossing frequently is also not a good practice and should be avoided. When plaque gets deposited on gums, it leads to Gingivitis and several hygienic issues emerge. Not only this, the signs of irritation also emerge in gums. Although it is painless but it must be dealt seriously before it makes matters worse for you. It is often seen that blood lightens due to certain medication which ultimately leads to gum bleeding. Instead, alternate medication can be taken, as suggested by practitioner. It is best to floss, clean the teeth and gums properly at least once a day.

One can consider body as a machine which requires several minerals as well as vitamins to function properly. Gum disease can be protected by including more vitamins and minerals in the diet. For example, including diet rich in Vitamin C helps to get good health.
Thus, by now, you must have got a fair idea as to how to avoid gum bleeding and what steps can be adopted if you come across a situation of gum bleeding.

Have you selected your dentist wisely?
Scroll to top